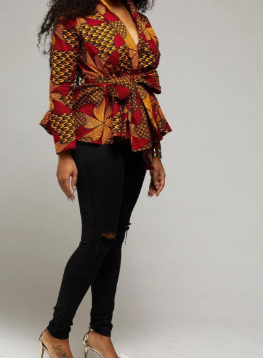 Over time, African clothing has changed and this began during the 20th century when the Africans began to do trade with the western countries. Arabs and Europeans influenced the African clothing a great deal and the trend continues. The influence of the westerners and Arabians is seen in the styles, embroideries, and the long robes won in some of them as a lifestyle.

When you walk to that African wear store, the following are some styles that you may want to explore

These are full-length embroidered robes, which are otherwise called boubous. This is a garment commonly worn by East African women but originally worn by the West African men. How the tables turned, it is a story for another day. Kaftans are made of cotton or silk and usually button down the front. This style is also a favorite for the women in Senegal, Mali and some parts of Ghana.

Traditional African women clothing comes in a variety of styles, colors, and print; from the vibrant indigo to the earth-tones. These may include; veils with elaborate motifs, beaded skirts, and such. African women are also famed for their colorful and elegant jewelry made from glasses, copper, and beads. Case in point is the Ndebele women in South Africa who are adorned for their African traditional dress-style adorned with beadwork. Because of the extremely hot climate in this area, you will often see them going topless.

The queen of Africa dress is a flamboyant design and a traditional garment that shows off the full woman’s figure. The tie-dye styles are suggestive of the young African women fertility. The modern African royalty dress is worn by the Royal African Queen and is perfectly trimmed with braids.

In East Africa where the weather is hot most of the times during the day, Kangas and Kitenges are the favorite and are worn around the waist. Kenyan men also wear long-sleeved dashiki shirts, which are perfectly matched with a hat and pants. Some men also wear kaftans although this has become a preserve for women nowadays. If you are going to Tanzania, you need to get a white robe called a ‘kanzu’ and a round cap (kofia) – a flair for the dominant Swahili community. This will make you feel part of the wider community and avoid the spectacle of an outsider.

Africans adore rituals and special occasions and therefore they have special wear for these events. For instance, in some cultures, when a girl is being ushered into womanhood, the women will wear showy clothing. On the wedding day, they’ll adorn themselves with beads on their collars, brass earrings, and large elaborate head-ties.  Therefore, if you happen to be visiting the Zulu in South Africa for any occasion, you need to get the details right on what to wear. Visiting a  good African clothing store will help you in choosing the right clothing for whatever occasion you’re up to.

The African continent is rich with style and therefore whatever dress you’d prefer and depending on the occasion, you’ll be spoilt for choice.